MOVING TO THE LIGHT SIDE

A Couple Transitions from Sail to Power

At RLYS we don't take sides. We are both sailors and power boaters, and we just love to see people out enjoying the cruising life. This cruising couple has embraced both and spent several years sailing their Antares 44 before deciding to list her with us and move to a PDQ 34 Powercat. 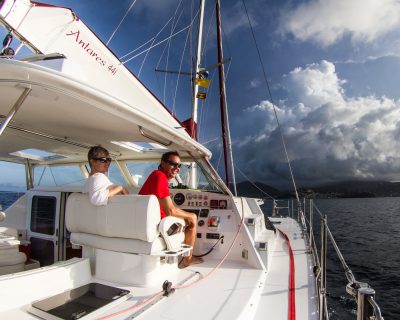 Meet Craig Acott and Laurie Bowers, a Canadian couple whose first foray into any kind of cruising was with the purchase of their Antares 44i in 2010. They went from land-locked Edmonton, Alberta to the South Atlantic seas to pick up their boat from Argentina. With a couple of cases of wine from Mendoza, a few offshore sailing lessons and a huge sense of adventure, they spent 6 months sailing up the coast of South America to the Caribbean. Nearly 6 years and 10,000 nautical miles later, they sold their Antares and bought a PDQ Powercat.

Laurie writes: “This boat has the same DNA as our sailboat from world-class designer Ted Clements…I had stepped on one while at the Miami sailboat show in 2007 and was impressed by its use of space and quality of construction. It is not a sailboat but will take us to quiet and shallow anchorages comfortably and in a fuel-efficient manner…We won't be going offshore but will instead explore shallower North American inland waters and more remote areas in the Bahamas.”

Of course, we’re thrilled that Craig and Laurie decided to not only list their Antares with us, but to also buy one of our listed powercats. And if we can take a minute to boast:

“We cannot imagine buying or selling a boat without the Rhumb Line team behind us. We have both sold and purchased boats under their brokerage, and were thrilled with how Rhumb Line handled all aspects with a high degree of professionalism and an obvious extensive knowledge of boats and the boating life. With a long history in this family business, they knew our boats inside and out, and provided invaluable technical, financial, and legal advice. They are highly skilled negotiators, and kept this often-difficult process on a positive and constructive track. We could relax and enjoy the process, knowing that they would find the right buyers for our listed boat, and subsequently the boat that perfectly suited our needs as purchasers.” 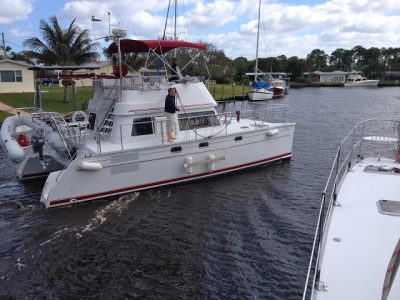 Link here to read their full rave review on working with us.