Weaving Past Icebergs Aboard a PDQ 34

With each forward stroke Ria Evans got a bit closer to the crystal clear blue water, balanced on her standup paddleboard, exploring the tranquil anchorage as the sun glistens off the calm waters. This idyllic scene isn’t in the Bahamas, but in Tracy Arm Cove in Alaska – and the clear blue water this time is in the form of the translucent icebergs poking out of the frigid waters of the Pacific Northwest. 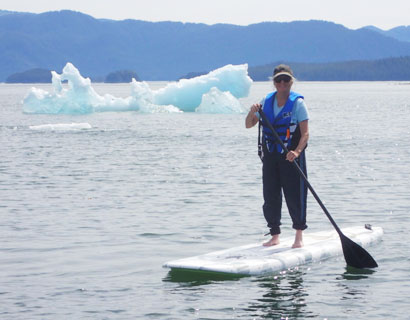 After four seasons cruising the east coast of the United States aboard their PDQ 34 His Idea, and logging 1000 miles of coastal, lake, river and inland waterways cruising, Ria and her husband John traded in their flip flops for warm parkas and left the Intracoastal Waterway and azure waters of the Bahamas for the towering coastal mountains, lush green landscapes and glacial icebergs of the Pacific Northwest.

As the ‘lead explorer’ of the pair, it is no surprise that it was his idea to ship their PDQ 34 out west. In the summer of 2015, they loaded their PDQ onto a transport ship from North Palm Beach on a 6000 mile trip via the Panama Canal to British Columbia.

“We really like our boat. Its a part of us,” John explains adding that as Canadians, they had already paid the sales tax on their boat when they cruised north along the Great Loop, and after all things where considered, it actually made more financial sense to ship their boat back home. 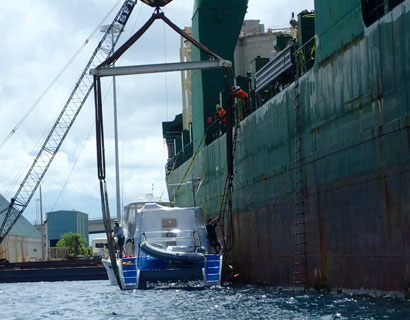 The process was not nearly as daunting as you would imagine and after reviewing several quotes from different carriers, they selected Seven Star Yacht Transport who quoted them about 2/3 less than the others.

“They were a good company to work with and their Florida rep was great to deal with,” said John. Having said that, the only advice he has for others is to be ready for delays – a lesson we also learned when shipping the PDQs to the Baltic Sea in 2007.

‘The type of cruising and the cruising ground is very different, but if we can do it, they can do it too,” said John, explaining that cruising the along West Coast presents its own set of rewards and challenges.

“There are lots of things to see. I recommend keeping your boat in the west coast for at least 3 seasons to do justice to the cruising here,” John explains, adding that he would highly recommend east coast cruisers follow his lead.

To acclimatize to the nuances of cruising in the Pacific, they spent the first season exploring the Discovery Islands from Campbell River to Port McNeill on Vancouver Island’s east coast. 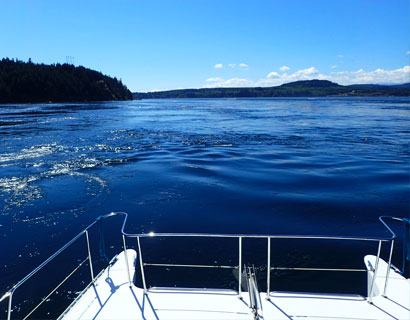 “The tidal current and swells as you head north are challenging. You have to read the tide tables properly, but in a PDQ, which has the power and speed, its nothing that a prudent mariner couldn’t do.”

Timing is everything. The currents combined with wind conditions can result in steeper seas. And it can be a little nerve-racking to cruise though bubbling eddies and whirlpools. The strongest currents they experienced were about 6-knots.

The Evans’ also made a few adaptations to their boat before setting out. They added another 100-feet of chain to their standard 50-feet, and with the existing 100-feet of rhode, they were able to safely anchor in deep waters where you can experience 25-foot tides.

They also quickly became more proficient at using their radar, something they rarely used on the east coast. Radar and the addition of an AIS receiver have been useful tools to help navigate in less than ideal circumstances. 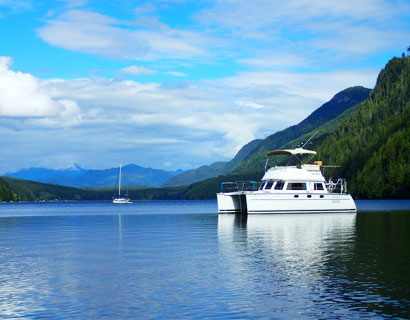 “August in Alaska is called ‘Foggest’. The visibility on the water is less than a mile, but we had AIS and you just go slower and try to make visual contact,” John explains. Of course, like any long-range cruising, it’s essential to make sure your boat is in great mechanical order as the further north you go, the services become far and fewer in between. And while the Pacific Northwest looks like a vast wilderness, you’re typically cruising in protected waters with a safe harbor within 5 – 10 miles.

This past summer they ventured north of Vancouver Island making the 2500-mile journey to Glacier Bay in Alaska and back – definitely a new frontier for PDQ cruisers.

Glacier Bay National Park & Preserve covers an area of 3.3 million acres and has more than 1,000 glaciers within the park. The longest and widest of the tidewater glaciers is Grand Pacific, with a length of 35 miles and a width of 2 miles. They visited five of these glaciers – Grand Pacific, Johns Hopkins (the deepest glacier measuring 200-feet below the waterline), Margerie, Lamplugh and Reid.

“It is unique for boaters to go and cruise around in what I would describe as the top of the mountains. In some areas you’re cruising above the tree line. For anyone with a sense of adventure who wants to try something different, it is very doable with wonderful anchorages accessed through narrow entrances,” said John. 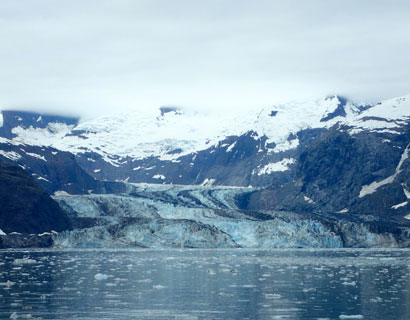 Sometimes we could only reach within a few miles because of the amount of floating ice they create, however they are so large that one still feels their size and grandeur. In other cases, we were able to get as close as we dared – about a quarter mile – while still maintaining a safety zone in the event they calved an iceberg and created a large wave. At Reid Glacier, which is only touched by the sea at high tide, it was possible to use the dinghy to go ashore and get very close to the glacier’s face, and peer into the many fissures and ice caves that are present there.” John writes on their blog ezcruising.net. 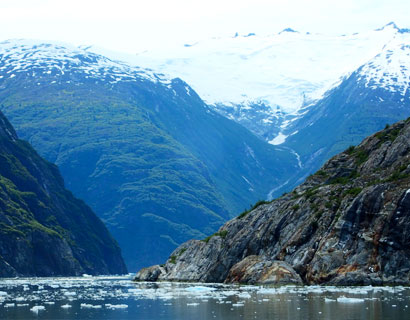 Another notable destination is Tracy Arm, which is located about 50 miles south of Juneau. While Glacier Bay is the Holy Grail of Alaska cruising, Tracy Arm offers unique fjords framed by precipitous mountains, cascading waterfalls, icebergs and, of course, glaciers. Wildlife encounters, including humpback whales, seals, dolphin, sea otters and bears, the proximity to glaciers and icebergs, and the unique scenery are all part of the adventure. 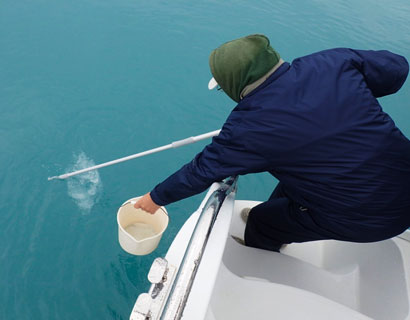 “People are going there [Alaska] regularly and there is a fairly considerable number of boats from the US and Canada cruising there. There are so many places to go and the fishing is great,” said John. And thanks to the efficiency of the PDQs, long-range cruising is not an issue.

John and Ria will have plenty of time to plan their next season over a few cocktails made with the 200-year-old ice they fished out of the ocean. They will most likely cruise to the mid-coast between Vancouver and Prince Rupert, BC to explore areas like Fitz Hugh Sound, Hakai Pass famous for its unsurpassed salmon fishing, and potentially the Haida-Gwaii archipelago across the Queen Charlotte Sound. 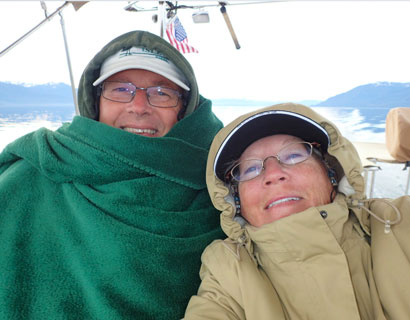 The possibilities for cruising the Pacific Northwest are truly endless and we look forward to catching up with them next season to hear about their most recent adventures.

You can follow John and Ria on their blog at www.ezcruising.net for more of their stories and to view their inspiring photographs. If you have any further questions about shipping your PDQ or if you want more information about cruising in the Pacific NW, contact us for John’s information.

Exploring Southeast Alaska (Don Douglass and Réanne Hemingway-Douglass); an excellent guidebook; the Douglass' also publish 5 other guides on various parts of the west coast that would likely be good references for cruisers unfamiliar with these waters.

Best Anchorages of the Inside Passage: British Columbia's South Coast From the Gulf Island to Beyond Cape Caution (Anne Vipond, William Kelley); also an excellent guide, with great pictures.

Waggoner Cruising Guides: Exploring Alaska and British Columbia; we downloaded this guide onto my computer, but did not use it as much as the other two.